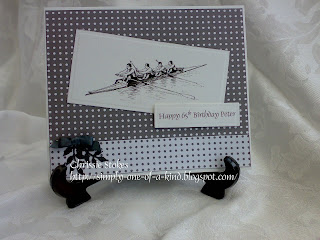 I was asked to make a card for an ex-rower. I didn't want to do anything over-complicated and so decided to use the Sketch from Card Patterns #38 as the basis for my card.
The papers are from Cuddly Buddly, using a positive and negative version of the dots from the Fairy Fun set. I wrote the sentiment on the computer and decided to make the embellishment in the corner into a kind of victor's wreath.
When my son was at Cambridge, he was Boat Club Captain of his college (Gonville & Caius) for a year. We used to go up to watch him row in the series of races called the Bumps.
As the river is narrow for much of the way in Cambridge, there isn't room for crews to row side by side, so they have a kind of pursuit race. They set off at timed intervals and row like mad to try to 'bump' into the boat in front of them. Should they succeed, they move up a place for the start of the race the following day. The idea is to finish at the front of everyone over a series of about 4 day's races. They are then said to be Head of the River and win kudos and tropies etc. Should any crew manage to bump the boat in front, they pull greenery from the trees overhanging the river to make wreaths which they wear on their heads immediately following the race. Should they manage to 'Bump' every day then they are awarded 'Blades' and are entitled to have a blade or oar painted with their college colours and have the names of the crew signwritten on it. David was entitled to about 4 during his time at Cambridge but we only had one painted up for him as they are really expensive to have done... then where would you put 4 of them? We have one in our garage and we're not sure how to get it up to his house in Suffolk!!! They are very, very long!!
Posted by Chrissie at 15:27