Yesterday was a busy day. We sang at a wedding on the Isle of Wight in the afternoon and somewhere along the way I lost my 'Whale Tail' pendant from my necklace which we bought in Alaska. The necklace had come undone and got caught in my clothing, but sadly the pendant was lost.
On our return, we received some terribly sad news, that a close friend of ours had collapsed and died that morning whilst out shopping. He and his wife had just returned from Canada the previous day, following a visit to their son in Montreal. So that was a real shock.
We had arranged to spend the evening having supper with neighbours, and so as you may realise, there was no opportunity to spend time blogging. 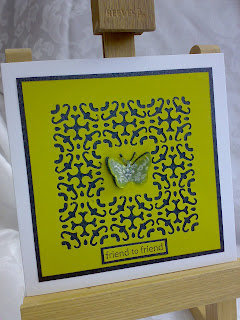 For Day 146, the card had to be symmetrical (apart from the sentiment). I thought I would try out a new punch from Papermania, I bought five for £5 from the Docrafts site, a saving of £43 apparently. Trying to get the punch square to the paper each time and to get the paper the correct size to turn the corner was quite a job in itself and quite a few pieces of paper ended in the bin, but this one isn't too bad. The butterfly is from a Cuttlebug die and the sentiment is from Unity stamps.
Daring Cardmakers challenge is entitled 'On the edge', where the edges should have some special treatment. Trying to use this punch accurately nearly sent me 'Over the edge'... so maybe that qualifies! 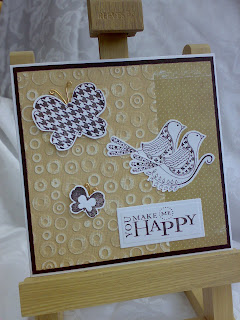 The ad inspired one gave me a headache!
I tried with all sorts of bits and bobs and hated everything I did, so discretion being the greater part of valour, I decided to take my inspiration from the content rather than the colours.
All the stamps are from Unity Stamps some from last month's kit, some from this month's... but I love them.
So here we also have butterflies and other winged somethings (the birds) for Stamp Something's Challenge... no bugs though this time!
The papers are Core'dinations and My Mind's Eye.