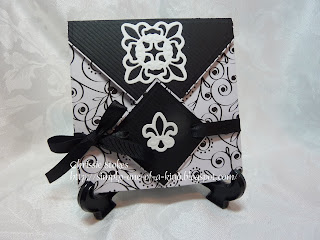 I have been fiddling around with this card all evening, numerous sheets of variously folded paper are in the bin, but at last a card has emerged.
I watched a video on You Tube, on which I based this project, but I think that the lady in question was a little more adept than I am.
It is for several challenges.
Crafty Catz - fancy Edge & Ribbon (the centre has fancy edges)
Creative Inspirations - Monochrome
Little Red Wagon - Black & White
Crafty Ann - New Technique
Dutch Dare - Gate Fold 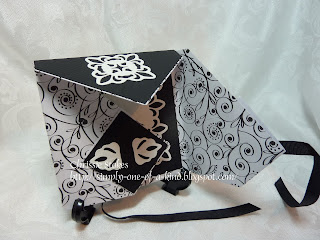 It is, in fact a kind of glorified Gate Fold card. It opens in a similar manner, but has the flap at the top which tucks into one of the squares at the edge of the front fold. I decided to add a ribbon, which wraps around the folded card, but slips behind the motif on the front through two ribbon slits. The base paper is from Clare Curd's Signature Range and the the white die-cuts are Spellbinders Fleur de Lis Pendant. The sentiment is from Stampin'Up. 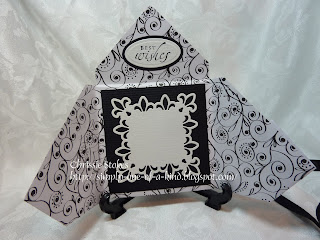