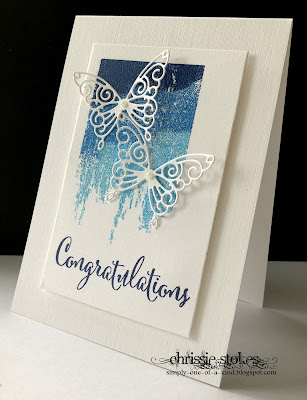 Don't you just hate it when a card has gone well during creation only to be ruined at the last moment!
I felt that this one was fine until I stamped the sentiment in my MISTI. Someone once gave me a tip that to make the magnets easier to handle, a cover of Washi tape made them easier to handle. Sadly one of the magnets had got  something on it which transferred to the bottom corner of the card. I'm not really sure what it was but it was indelible. My answer to the problem was to trim the top panel quite drastically from its original size. I think it still just about works.
Inspired by the Ombre challenge at CAS Mix Up I made this one for the Challenge  at Just US Girls. 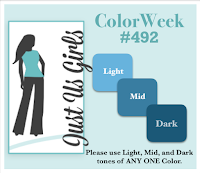 I even went as far as using similar colours to those in the prompt.
The stamp is from Papertrey Ink, inked with Versamark, sprinkled with three shades of WOW embossing powder and heat set.
The sentiment from Clearly Besotted was stamped with Stampin' Up, Night of Navy ink. The butterfly dies are from Simon Says Stamp. 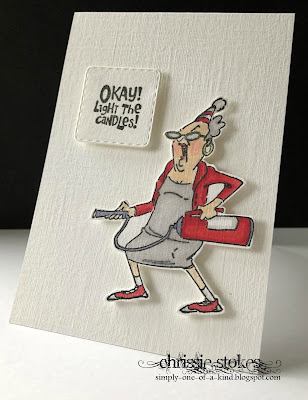 Here is my second rescue of the day!
I was going to cut out this AI image with a rectangle Framelit die, but somehow the die must have shifted just a tad as I began to wind it through my Big Shot so that the fire extinguisher ended up right at the edge of the cut out and was totally unbalanced. The remedy was to cut the whole thing out with scissors, smoothing the edges with an embossing tool to give  a better finish and mounting  it on dimensional pads. I think in fact that this was a better treatment than the one I originally planned. The sentiment which was part of the original Framelit diecut was just re-cut with a little, stitched, rounded corner, square die.
It's for the challenge at CAS on Friday - People