Michelle has asked me to explain how I used my DIY Lego 'Stampamajig' on my Duck card for Day 110 of 365 Cards, so I thought that I would have a go at explaining!
I began by stamping the duck image on card. 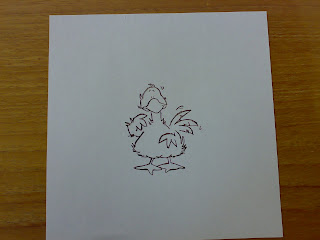 I then stamped an identical image on another piece of paper and cut out the top part only. (I didn't want either of the legs of the duck at the rear of the image to show as they would be at a funny angle.) 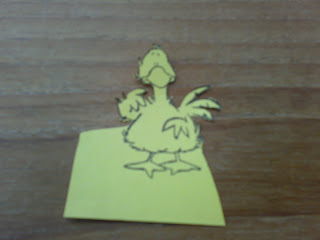 I stamped the duck image again onto a square piece of plastic packaging, using Stazon ink. (I used the outer from a set of Nestabilities, but fruit or vegetable packaging will do just as well.)
This was placed snugly into the corner of the Lego corner shape (Stampamajig) and the stamp fitted snugly into the same corner. When cutting the plastic, I left a little of the edge on a couple of sides, so that it didn't slip under the Lego. Unfortunately, this doesn't show up too well on the picture. 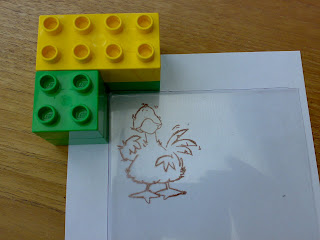 I then placed the mask exactly over the original duck and positioned the plastic in the desired position over this. 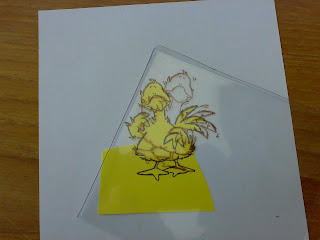 I then placed the lego carefully up to the plastic, removed the plastic, (keeping the lego exactly where it was), and stamped the image again ensuring the stamp was placed snugly into the corner of the Lego again. 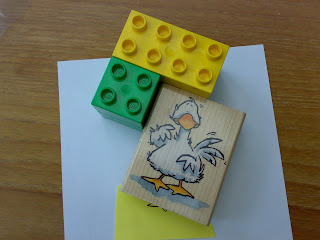 After you remove the mask, the second duck is peeping over the shoulder of the original.
That's the theory anyway!
If things are still unclear, do ask and I'll try to explain a little more.
Look at the next posting to see the finished card.
Chrissie
Posted by Chrissie at 15:02

Email ThisBlogThis!Share to TwitterShare to FacebookShare to Pinterest
Labels: Tutorial