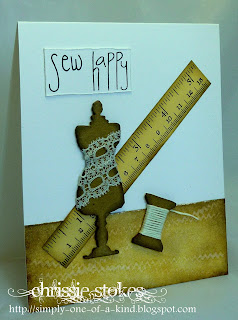 I quite had fun making this card. I saw this inspiration card (below) at Muse and remembered that I had bought some Kanban tape measure stamps which to date had not seen ink, so out they came. I also found a piece of card from some packaging which I thought would make great chipboard shapes and so out also came my Movers and Shapers dies.
For the bottom panel, I used the technique from Technique Time Tuesday, (but missed the deadline) which is to colour a piece of card with Distress Inks using sponge daubers and then stamp onto it using a pad made from kitchen towel soaked in water instead of ink.
I used a zig zag stamp which I had removed and separated from a Stampin' Up wheel containing several stitch images. I think it makes quite a subtle effect.
The sentiment is partly from the Alley Way stamps and partly handwritten, you can probably guess which word is which!

Yet another lovely day today, aren't we lucky!
Posted by Chrissie at 11:58

Email ThisBlogThis!Share to TwitterShare to FacebookShare to Pinterest
Labels: Stamping with water